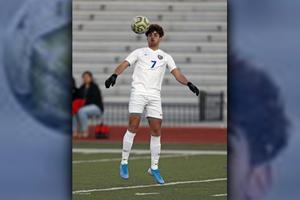 The Tigers opened their season against tough competition grinding out five victories in three days to take the Teinert Construction Kick-off Classic Championship in Lubbock.
The Tigers opened competition with a 3-0 victory over Lubbock Cooper. Adam Aboohamidi led the way for the Tigers netting 2 goals in the match, Landon Bond contributed the third goal. In the second match, the Tigers once again held their opponent to nil with a 3-0 victory over Pampa, this time it was Cooper Scott, Caleb Belk and Drew Hocutt all netting a goal. Frenship’s third match of the season was another 3-0 contest, this time against El Paso Jefferson. Aboohamidi again had a multi-score match with 2 and Hocutt tacked on the third.
It was the fourth game of the Tigers’ season before an opponent scored against their defense. Aboohamidi scored two goals for his second straight match and Brennan Cruz this time found the back of the net. The fourth score was recorded as an own goal by EP Chapin.
Finally, the Tigers faced the Lubbock Monterey Plainsmen in the Championship game of the tournament. This time it was Hocutt leading the Tigers with 2 goals scored and Aboohamidi tacked on the third as the Tigers won the day 3-2 in a hard-fought contest.
“The last game, very tough on our players, as well as Monterey. Five games in three days is rough, been there and done that, so to see that level of work ethic, powering through fatigue tonight is just so admirable,” said Head Coach Scott Smith. “With that being said, it’s been a valuable three days to analyze our successful trends, areas to build on, and areas of improvement moving forward. I’m so happy for the boys that while we can analyze the performances, we also got to play in some snow, have fun during games, and watch them put another trophy in their cabinet.”
The Tigers dealt with the wild weather felt throughout the Lubbock area, playing their morning match Saturday in the snow and the Championship match in sunny weather near 60 degrees. The Tigers will be back in action at the Johnson County Showcase January 16-18 in the Metroplex. They’ll open play Thursday against Colleyville Heritage at 4 pm.
Alexis Cubit from Lone Star Varsity has the recap of the Tigers’ victory in the Teinert Construction kick-off Classic here: https://www.lubbockonline.com/sports/20200111/tigers-start-season-with-tournament-championship
Photo Caption: Adam Aboohamidi heads a ball during the Teinert Construction Kickoff Classic [Brad Tollefson/AJ Media]
Published January 14, 2020 Print