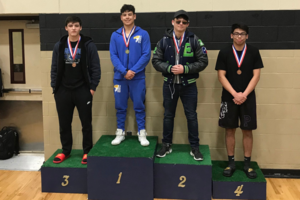 In only its second year of competition, Frenship Tiger Wrestling has claimed its place not only among the other high-performing programs of Frenship Athletics, but as a program on the rise across the State of Texas. At the District 2-6A tournament held at Keller Central High School, five Tigers earned medals, qualifying them to compete at the Region 1 Wrestling Tournament on February 14-15 in Haltom City, TX.

On the girls’ side, Andrea Laughlin finished 4th in the 128lbs division, Allie Bennett placed 3rd in the 138lbs division, and Leeana Trevino snagged 3rd in the 165lbs division. All three will compete at the Regional Tournament. For the boys, Isaiah Kema finished 4th and will also be advancing. Daniel Garza won the 170lbs weight class bracket defeating Norwest Eaton’s Scout Wilson and improving to 24-3.

Congratulations to Head Coach Clinton Wood on a strong District 2-6A Tournament and impressive growth in only the second season of this new and exciting program.