Frenship High School Teacher Selected as 'Teacher on the Rise' 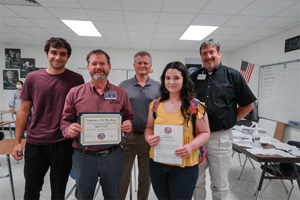 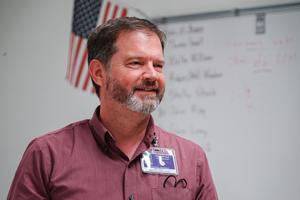 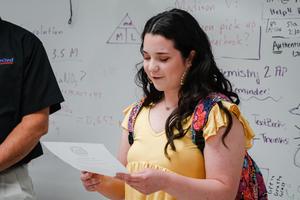 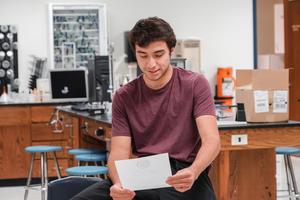 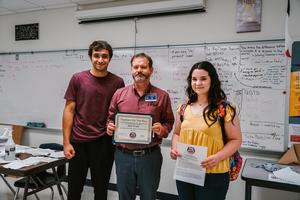 Congratulations to Frenship High School AP Physics and Chemistry Teacher Neil Pratt on being selected as a Mrs. Baird's 'Teacher on the Rise.'

Each month, an elementary, middle school, and high school teacher across the Lubbock area are named 'Teachers on the Rise' based on nominations made by students.

On Tuesday, a representative from Mrs. Baird's, United Supermarkets, and the two FHS seniors that nominated Pratt, Amber Sena and Cade Salisbury, surprised him with the news of his nomination and win.

"When the gentlemen from Mrs. Baird’s and from United Supermarkets made it clear that Amber and Cade had nominated me, and that I’d been selected for the recognition, it was overwhelming," Pratt said. "I think so highly of Amber and Cade."

Pratt said that his favorite part about teaching is seeing the light bulb go off when a student finally understands what he has been teaching them. He said that he became a teacher 20 years ago because he enjoys those "AHA" moments.

"My favorite thing about teaching is the satisfaction of seeing students show a depth of conceptual understanding when they successfully solve difficult problems that were previously beyond their reach," Pratt said. "I enjoy seeing students learn how the models I teach explain phenomena in the material universe."

Pratt said the nomination letters from Sena and Salisbury were touching. He said that this nomination is a true honor.

"They described personal impacts from our class that were far beyond what I imagined," Pratt said. "What I felt at the surprise announcement of the award, and when hearing the nomination letters read, was that of a dream I’d never dared to dream had come true."

When asked why they nominated Pratt, Sena and Salisbury described the many ways that Pratt has inspired them.

"Mr. Pratt is a dedicated teacher that goes above and beyond when it comes to education," Sena said. "Mr. Pratt inspired me to join clubs such as UIL Science, and helped inspire my major I am pursuing at Texas Tech University. He has inspired me to pursue medicine as well."

Salisbury described Pratt as someone who helped him become passionate about learning.

"When I started school my senior year, I hated all of my classes and despised coming to school," Salisbury said. "That was until I met Mr. Pratt. He quickly shifted my aspirations and made me passionate about the fields I chose to pursue."

Both Sena and Salisbury expressed how much Pratt has made their time at FHS so special.

"He never failed to encourage me, even when times were rough," Salisbury said. "I am very grateful to have had Mr. Pratt."

Students interested in nominated a teacher can submit the nomination form by CLICKING HERE.