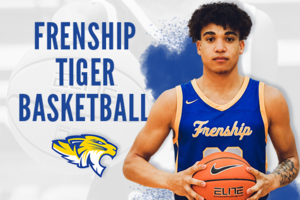 Last Saturday, the Frenship Boys Basketball team took on Midland Greenwood and secured their first win of the season, 76-43. On Tuesday, the Tigers faced the Amarillo High Sandies and fell 61-48.

After the win against Midland Greenwood the Tigers were ready to go when the Sandies rolled into town on Tuesday.

Frenship Boys Head Basketball Coach Paul Page said that a hiccup early on took a toll on his team.

“Anytime you play a team the caliber of Amarillo High you know it’s going to be a great game and this one didn’t disappoint,” Page said. “We were proud of how our kids handled adversity early as we got down 12 – 2 to start the game, but we really matched them from that point on.”

T.J. Miller started off the game strong but was shut down by the Sandies defense after a nine-point run in the second period. Tracy Godfrey had a big night scoring 15 points and grabbing 10 rebounds for a double-double.

The Tigers will take on Canyon Randall on Friday, and will play a couple during the Thanksgiving break against Abilene Wylie on Monday and Midland Christian on Tuesday.