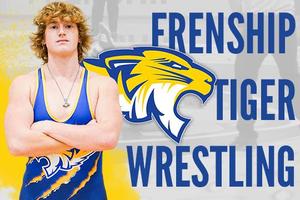 Frenship Wrestling has been dominating the mat recently as they set new program records in this week's Tri against Palo Duro High School and Coronado High School.
Last weekend, the Frenship Girls Wrestling team competed in the Caprock Invitational Tournament and had two stand out athletes. After competing against 32 other schools, Rebecca Vann placed 2nd and Genesis Zuniga placed 4th overall.
The Frenship Boys Wrestling team competed in the Hereford Invitational Tournament and came home with a lot of hardware. Thirteen wrestlers placed individually in the top 20 and won ninth place overall as a team. The Tigers went 99 and 71 overall for the tournament with a 58% winning percentage.
On Tuesday, January 11, the Frenship Boys and Girls Wrestling teams competed in a Tri against Palo Duro and Coronado High Schools. Both teams won the Tri, each setting new program records.
Frenship Wrestling Head Coach Clinton Wood said he was very impressed with his wrestlers.
"The boys won over Palo Duro 41-18 and Coronado 59-24 and set a duel record of 11-1," Wood said. "The girls won over Palo Duro 30-12 and Coronado 33-6 and set a duel record of 9-1."
The Tigers will take to the mat again this weekend in the Monterey Invitational Tournament. More information for the tournament can be found here.
The Tigers will wrestle at home next Tuesday, January 18 for Senior Night in a Quad against Amarillo, Lubbock High and Monterey. Matches will take place at the Ninth Grade Center starting at 4:00 p.m. and admission is $5.00 for adults.
Published January 13, 2022 Print