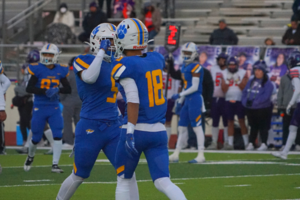 The Tigers defeat El Paso Eastlake 35-17 to secure the Bi-District Championship and move on to the Area round of the playoffs.
After winning the District Championship, the Tigers had the opportunity to host the first round of playoffs at home. The Tigers took on the El Paso Eastlake Falcons, ultimately winning 35-17.
Frenship took the lead in the first quarter, going up 14-3. While the Falcons made it close at 21-17 at halftime, the Tigers were able to completely shut them out in the second half.
The win was huge for the program - it was the Tigers' first playoff win since 2014. The Tigers are now 9-2 on the season overall.
The Tigers aren't done yet. They will look to win the Area Championship and the chance to progress to the Regional Semi-Finals.  The Tigers will take on the Southlake Carroll Dragons on November 18 at 7:00 p.m. at San Angelo Stadium.
Published November 17, 2022