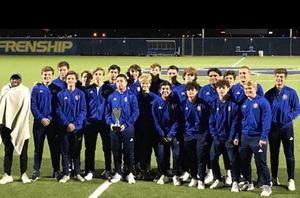 It was a clean sweep for both the Frenship boys and girls soccer teams last weekend as the Tigers swept through their respective competition to capture the Frenship Cup championship trophies.

It was a clean sweep and a great start to the 2019 season for both the Frenship boys and girls soccer teams last weekend as the Tigers swept through their respective competition to capture the Frenship Cup championship trophies.

The FHS girls collected four victories and outscored their opponents by a collective score of 32-0 in winning the title. After disposing of district rival Midland Lee 9-0 on Thursday, the Tigers followed up on Friday with a 14-0 win versus Dumas and a 5-0 shutout of El Paso Bel Air.

Natalie Jones led the team with 11 goals on the weekend.

“The girls had a good weekend to develop,” said FHS girls soccer coach Gery Joy. “The team had to replace some key players from 2018 and are working to find depth in different areas. This weekend gave us a chance to see various combinations and evaluate in a game environment. We are pleased with the effort and look forward to working on some of our areas that need correcting.”

For the FHS boys, the results were much the same as the Tigers swept through the competition on their way to the tournament title.

After blasting through pool play with wins over Coronado (10-1), Dumas (4-0), and Abilene Wylie (6-0), FHS beat Wichita Falls 3-0 to advance to the championship.

In the championship game, the Tigers claimed a 3-0 forfeit win over Wichita Falls Rider after the Raiders decided not to play due to Saturday’s late 8:00 p.m. scheduled start.

“We were disappointed that Rider decided against playing in the championship game and were happy to just take second place, but, regardless, I think the level of our boys would’ve resulted in the game going the same way,” said FHS boys soccer coach Scott Smith. “I’m very pleased to observe our fine young athletes show their five months of training with organized, mature, dominant performances. We spoke about how our team this year has brought back talented and experienced returners, but now also includes talented and hungry incomers.

“I’m very happy with that balance, and I’m delighted with the foundations we have laid through the performances during this tournament. In addition, the mentality of the team is where I want it. They’re not playing just to win, they take pride in their performance levels regardless of what the scoreboard reads.”

Both teams travel to Georgetown this weekend to play in the Governor’s Cup Elite Tournament. The girls open the tourney versus Klein Oak on Thursday while the boys play Thursday versus Laredo Alexander.