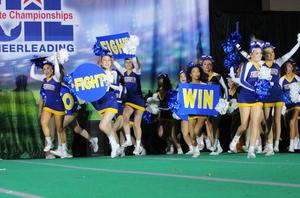 The spirit of the Tiger Pride stretched into the metroplex as the Frenship cheerleading team competed at the UIL Spirit State Championships last weekend in Fort Worth. The spirit of the Tiger Pride and of the blue and gold stretched into the metroplex and was felt across the state as the Frenship cheerleading team finished in fourteenth place out of 72 Class 6A Division I cheer squads at the UIL Spirit State Championships last weekend in Fort Worth.

This is only the third year FHS has competed in the championships but marks the team’s second consecutive trip to the finals, a final round of the top 20 teams selected after Friday’s preliminaries.

This year’s success also comes in the teams’ first year to compete in the Division I Class 6A championships, a division of the state’s largest high schools.

“I am so proud of this team,” said FHS cheer coach Kayci Smith. “They went against the hardest division at UIL and they came out as number 14 in the state. We are the only 6A team in our district to make finals. We went in wanting to make finals, work as a TEAM and leave everything we had on the mat – and we did just that!”

“I can’t explain to you the feeling we had leaving that stage,” Smith added. “All smiles, hugs, tears and pure joy. I want them to ALWAYS remember that feeling – that true sense of Tiger Pride and excitement.”