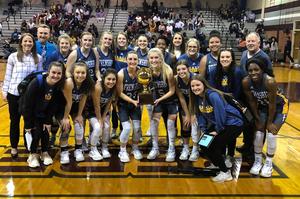 Twenty-nine wins and the outright District 2-6A championship, and the journey is just beginning.

Twenty-nine wins and the outright District 2-6A championship, and the journey is just beginning.

The Frenship girls basketball team finished out the regular season and their district title run Tuesday night on the road with another impressive, hard-fought 51-46 win at Midland Lee.

After playing an even first half that left the Tigers and Lady Rebels tied at 22, FHS stretched out a five-point lead over the next eight minutes and held on through the fourth quarter for the win.

The district champ Tigers (29-4) are now looking ahead to what hopes to be a long playoff run ahead. Last year’s team made it to the Region I Tournament for the first time since 2004, also the last time FHS won an outright district title.