Frenship Volleyball at 20-6 Record for the Season 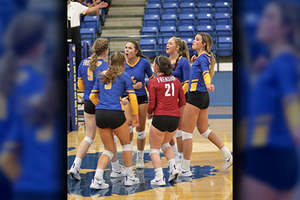 Frenship Tiger Volleyball defeated Trinity Christian School in four sets (25-18, 25-19, 24-26, 25-17) on Tuesday, August 27 to improve to 20-6 on the season. The Tigers were led offensively by Gracie Harrison with 8 kills and 2 aces, Lindsey Frick followed with 9 kills, followed by Aali Mayfield who chipped in another 7. Kayton Genenbacher added 4 kills to 3 aces on the day as well. Defensively the Tigers were led by Hanna Page with 23 digs, Emma Davila chipped in another 18, and Gracie Harrison and Kendall Mahaney each added 14. Aali Mayfield and Taylor Boyd both notched 3 blocks on the day.

The Tigers will be back in action on Tuesday, September 3 playing host to the Seminole Maidens in the Tiger Pit. Starting with the JV Gold and JV Blue will both play at 5:00pm followed by Varsity at 6:00pm. The Tigers’ game with Trinity Christian can be found now on www.frensthip.tv.